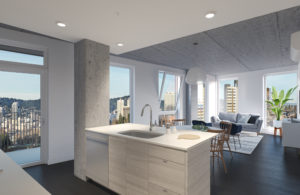 PHK Development’s seven-story, 162-unit condominium project at the southwest corner of Northeast 21st Avenue and Multnomah Street in Sullivan’s Gulch now has a name – TwentyTwenty – and will soon open a sales office in the former Brian Marki frame shop space at 2236 N.E. Broadway. Construction broke ground in the second half of 2017 and a completion date is anticipated in summer of 2019. Portland’s Hacker Architect designed the building, which is targeting LEED Platinum certification, and Andersen Construction is the general contractor.

“Portland has a substantial undersupply of condominiums on the market today, and we created TwentyTwenty to respond to that need,” said Patrick Kessi, PHK’s president and founder. “With Hacker, we designed a place that pays homage to the history and geologic forces that created Sullivan’s Gulch, while it fits the character of its community.”