Seven-story, 162-unit condo project gets going in the gulch 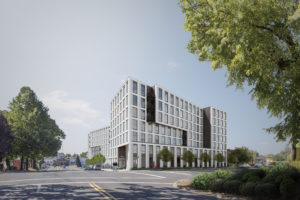 On November 14, Patrick Kessi and the team from PHK Development visited with the Sullivan’s Gulch Neighborhood Association to update them on the seven-story, 162-unit condominium project they have started site work for at the southwest corner of Northeast 21st Avenue and Multnomah Street.

The completed building will include two underground lots with 172 parking spaces for cars and an additional 265 spaces for bikes. Andersen Construction will serve as general contractor for the project, scheduled for completion in summer of 2019. The building has been designed by Hacker architects. Both companies are headquartered in Portland.

“We’re bringing beautiful homes to the neighborhood and we’re very excited about it,” said Kessi.