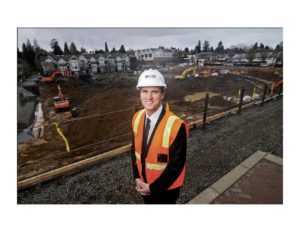 Pat Kessi, President of PHK Development, was named one of DJC’s Newsmakers of 2016. For Kessi, the projects he works on through his firm are as much about making other people’s dreams come true as about realizing his own vision. While working on the design of Marvel 29, a mixed-use project in the St. Johns area of Portland, Kessi brought together residents as well as the owners of small businesses in the area. He took their suggestions – and their concerns – to heart.