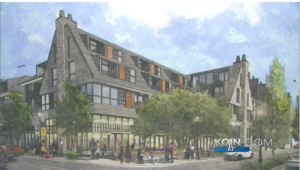 Downtown’s landmark Wizer’s Oswego Foods is gone, replaced by a swarm of construction workers and equipment. A dramatic reshaping is well underway on the final block of downtown that had held out for so long. Some worry that the four-story, full-block project that’s resculpting downtown’s hub will overwhelm the surrounding urban landscape and clog adjacent arterials with too many cars. But many city residents appear excited that Lake Oswego, after decades of starts, stops and controversy, is joining the growing number of suburban towns embracing a movement characterized by full-service, walkable downtowns. “This is really just a continuation of the village,” said Marsha Van Wyngarden, who lives directly across the street from the bustling construction site. “It’s an amazing evolution and we’re thrilled by it.”