From Wizer to The Windward 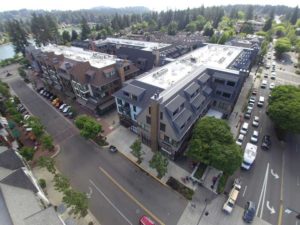 It’s been nearly two decades since the first developer contemplated building something new on the Wizer Block in downtown Lake Oswego.

But 16 years and several iterations of the project later, The Windward — a 290,000-square-foot mixed-use development — is officially welcoming new residents, retailers and restaurants to the site of what once was a 1960s-era, red-brick shopping center owned by the Wizer family.

A festive Grand Opening Celebration is planned for July 12, with tours of model apartments and community gathering spaces leaving every 10 minutes from a well-appointed central courtyard. In many ways, the development looks as if it has been here for years.