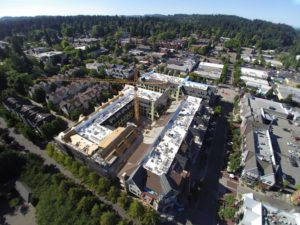 City officials join other dignitaries for a climb to the top of a Wizer Block construction crane in downtown Lake Oswego.

Lake Oswego’s Wizer Block construction project is about to hit another milestone: the removal of one of the two tall cranes that tower over the mixed-use development. But before that happens later this month, developer Patrick Kessi invited two groups of City officials and other dignitaries to climb one of the cranes for a scenic view of downtown. On Tuesday afternoon, the two groups climbed to the top of the 171-foot-tall crane in the center of the site. Technically, it’s the shorter of the two — the other crane is 212 feet tall — but for the intrepid group of climbers, 171 feet was plenty.  Watch footage from the climb here.